There are some additional steps that need to be taken for Dedicated Servers to fully enabled IPv6 based Networking. The steps required vary by your Operating System type, details for each of the main Operating Systems are below.

Editing the Networking Configuration for your server has the potential to disrupt networking access to your server, we recommend you ensure you have a backup of the files before you begin, and confirm you have access to the Server using any of the Out of Bands methods available (Memshell or your DRAC).

There are two files to edit for Redhat based distributions:

First edit the below file with your chosen text editor (e.g. Vi/Vim or Nano):

In here you need to append the following:

Next you need to edit:

To this file you need to append the following:

If you have more than one IPv6 address to add you can add additional addresses by appending the following line:

Once these changes have been made, restart networking with:

To add the IPv6 addresses to the network configuration of a Debian or Ubuntu server, you need to do edit the below file with your chosen text editor (e.g. Vi/Vim or Nano):

Append the following after the current eth0 section (carefully applying any indentation where needed):

If you have additional addresses to add then simply repeat the first line.

Once this is done, restart networking:

To configure an IPv6 Network interface in Windows you will need to access the Network Connections menu by entering the following into either the Command Line or start menu.

From this menu, you can right click your Network Adaptor and select Properties.

Then, select the 'Internet Protocol Version 6 (TCP/IPv6)' item and, ensuring the tick box is marked, select Properties within that panel as below. 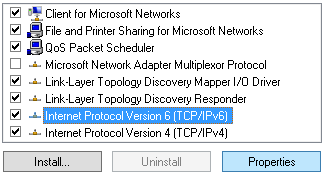 Your interface will be configured as per the example below, with the exception of the 'IPv6 Address:' field which is where you will enter the IPv6 address assigned to the Server. 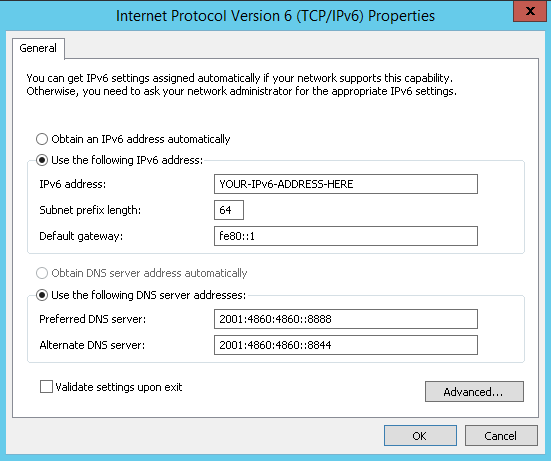 Please note, these errors can depend on your browser setup. Learn more